It has been over 10 years since the blockchain technology has been around or known to human beings. Still, not many people are aware of its potential and what it can actually do to elevate our day-to-day lives.

So, if you have been looking to learn a new IT skill that can open many high paying doors (jobs) for you, blockchain is definitely a solid contender. Here’s why.

7 Reasons why you should start learning blockchain today

Blockchain is still in its infancy

Blockchain technology is still new to many people. Not may youngsters are aware of blockchain and its potential. Hence they are missing the opportunity to learn this new technology. At the same time, the demand for blockchain experts is increasing with each day. According to a leading job website, there were more than 1700 job openings in the blockchain industry as of August 2018.

So, this is a golden opportunity for those who are looking to make a career in this field. It’s like a gold mine waiting to be tapped. And this is the best time to learn blockchain as the demand is much higher than the supply.

When considering a job, salary is one of the major things we look for. Everyone wants a job with a high salary. And so, when you’re planning to learn a new skill with the aim to land a high paying job, blockchain is a good choice for many reasons. The average annual salary of exblockchain engineers is in the range of $150,000 – $175,000, and increasing. In fact, blockchain is in the race of becoming the highest paid job in the IT industry.

If you learn blockchain today, you may get a job in no time. This is because the demand for blockchain experts, developers and engineers is quite high in today’s technology-dominated world. Many startups as well as enterprises are exploring their future in blockchain and they need experts to help with the same. Some of the most in-demand blockchain jobs include blockchain developer, blockchain consultant, research analyst, software engineer, etc.

Blockchain is what we can say a truly “cutting-edge” technology. The technology and everyone involved with it will have a great future. In terms of applications, we have only scraped the surface of what blockchain actually has to offer. The potential in this technology is very high, which will be continued to explore in the coming days. But for now, we have the opportunity to walk ahead of the crowd by learning blockchain.

One thing that almost guarantees the success of blockchain is its suite of advanced features like immutability, decentralization, security, distributed and speed. Blockchain is immutable, which means it cannot be corrupted, i.e. the transactions stored in a blockchain ledger cannot be modified or deleted. It is a peer-to-peer, decentralized technology, which makes sure that the transactions are transparent and not controlled by any external party.

Blockchain has the potential to effectively disrupt a number of industries with its decentralized and distributed infrastructure. This is one of the few technologies that can be actively integrated into any of the existing systems or processes in any industry to make them more productive and efficient.

One of the major reasons why people have been deprived of good quality blockchain education so far is the lack of resources. Even though there are multiple blockchain courses and certifications online that offer theoretical knowledge in the subject, it is also important to learn the practical aspects and implementation in order to become an expert in blockchain. This is why Blocklogy was created with the aim to deliver complete and career-focused blockchain education to the masses. Through its easy and interactive learning platform, Blocklogy is quickly becoming a major reason for youngsters to learn blockchain technology and make a strong career in it.

Blocklogy is a mobile based e-learning app offering certification courses on Blockchain. You can just download, subscribe and enrol for courses.

Download blocklogy from google play store through this link – https://play.google.com/store/apps/details?id=com.blocklogy.blocklogyapp.

How to learn Blockchain Tech? Best Resources and Learning Path 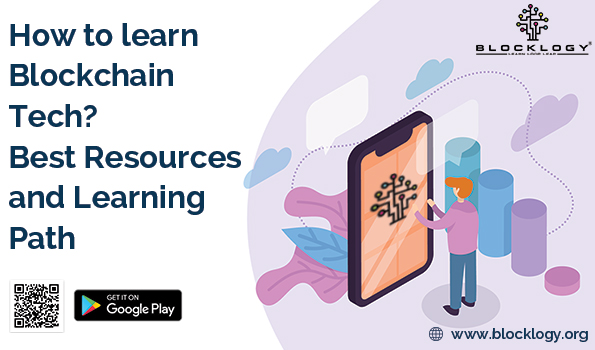 Blockchain is a word which is no longer unknown to many people. While most of us are still only wondering about blockchain, some have even started implementing blockchain into their real lives. Many top organizations around the world are actively experimenting with blockchain for the growth of their businesses in the modern world.

As the need for blockchain-based applications and projects increases, so will the demand for skilled blockchain developers and experts. Leaning blockchain technology can give your resume an advantage, giving you a fair chance to get ahead of the competition.

If you’re facing the same problem, you’re at the right place. In this article, we will discuss how to learn Blockchain.

How to learn Blockchain Technology to become an Expert Blockchain Developer

While learning a new and high-potential technology like blockchain can give your career new heights, it can be exhausting to find the proper resources to get started. If you are someone who is looking to learn blockchain tech from the start, here is how you can start.

Start with the Basics

If you want to make a strong career in blockchain, it is important that you know and understand the basics of blockchain. It will help you understand why and how the blockchain was created and how it actually helps mankind by improving the way things are done. In other words, it will give you a clear idea of what this technology is all about.

To learn the basics of blockchain, you need a good and reliable resource.

We recommend you to join the Master course at Blocklogy. The course is designed specifically for the blockchain learners and gives complete knowledge of how blockchain works and other fundamental topics, including network types, cryptography, wallet types, cryptocurrencies, blockchain programming basics & languages, etc.

By the time you finish learning the Blockchain basics, you must have a good idea of what blockchain is, how it works, the role of encryption in blockchain, blockchain data types and other related things.

Once you complete the Basic course, you‘re ready to learn the advanced and practical implementation of blockchain. Each blockchain module at Blocklogy is followed by assessment tests and practical exams, based on which students are awarded certifications on the blockchain.

At the same time, you can also start to learn programming in Blockchain. Solidity, Java, C are some of the languages used for developing blockchain applications (DApps). The demand for expert blockchain developers is high, so your focus should be on getting better by learning more. Make sure to keep practicing whatever you learn and try to develop your own applications in blockchain.